I tried to buy antminer in alibaba. I found a trader with 12 years good reputation and decide to buy from him. We settled a price and i paid through western union. I was scammed. Nothing came.... but the scammers is keeping calling me to get more money. To make long story short...... He hacked a decent site in alibaba Of 12 years reputation....... fishing for clients......sells something he does not have... and trying to get more money claiming by phone calls and whatsup...that he made mistake send 2 units instead of one ...asking another payment to or he stopps the carrier. He is very sophisticated.... he also reffers to a carrier site with false tracking number. He uses the name of the real owner of the hacked site....but when comes to payment.... he use ...in my case...the name of rashad peter collines..... and phone number
5702529434
Beware......
I lost only 1600 $ and almost doubled it ......
He is very convincing.... swear in god..... calls you day and night.....
It seems to be a well establish chain of Alibaba hackers.
Beware.
Show more...

When I was contacted in response to my requirement in Alibaba.com, the proposal was USD 495 with doorstep delivery VIA DHL. it never was specified that there will be subsequently request payment for insurance product certification handling charges etc and that this would cause my product to end up costing up to three times its initial value. After the first payment, Faco Farm Machines Tech Co Ltd sent me a confirmation email stating that for error they sent 4 units instead of 1 and they want to compensate me as follows. I will pay only for two more units and this payment will be made 7 days after the delivery of my products to avoid any inconvenience.

That did not happened I had to pay it before delivery to avoid more delays and additional payments. Then they requested me to pay USD 442 for the product registration payment was done without delay. Subsequently I was requested for another payment for USD 1381 for Customs again the payment was made and notifies without delay.

Then I was requested USD 903 payment for demmurage charges, again the payment was made in that ocassion they told me to pay USD 903 of demmurage charges and USD 990 of the two products and with that you will pay any additional value to avoid further payments for me. I refused to pay USD 990 before delivery of my products in consideration of their commitment to avoid me any inconvenience and that I could pay them up to one week after delivery.

I then I asked to speak with Rajah Stans boss and Rajah gaved me only the email of David Yao although all the complete information was requested phone web page address. In this context the payment of the demmurage charges was made agreeing that there will not be any other payments and my products will be delivery Sept 4th.

Then I was contacted again indicating that I must now pay USD 278 for VAT and handling charges. Payment was made requesting the confirmation that finally there are no outstanding values that does not happened.

Again I was contacted indicating that now is the final payment, but I must pay the value of the other two products USD 990 appealing that they will have an audit and that if I do not do it David Yao can lose his job. Immediate delivery is requested to proceed with payment that does not happened. David Yao gives me his word and commitment that this is the last payment and if that it is done in a timely manner as in reality happened since it was done at that moment, there will be no further delays or payments and my products would be delivered Monday, September 4.

Finally I had received a new email surprise for me another payment request They have decided that if I repay again 50 percent of all charges made to date Courier will pay me at the delivery USD 4160 hoping that with this there will be a longterm business relationship with me. In view of the above exposed I would like to emphasize In spite of being requested to them several times no payments support documentation has been given to me nor the invoice of my products. Faco Farm Machines Tech Co Ltd only sent a dummy proforma invoice modified in Paint from the scan of another clients document maybe or who knows where.

It did not happen To avoid inconvenience because they booked the products amount in a wrong way, I would pay USD 990 a week after delivery. It did not happen I had to pay it before The shipment would be made by DHL. It did not happen they sent the Tracking No of www.intrawaylogservices.com company that outsources the service.

David Yao promised that the payment made on 01 Sept would be the final payment and I would have my products on Monday Sept 4th. It did not happen they are asking me to repay extra USD 1502 for supposedly a refund. Then buyer never deliver my products after several payments, later they told me to perform repayment of only 25 percent of all charges USD 751 when I said no they continue insisting to me for perform the payment and then they promise to sent a bike for free if I perform the payment.

I request the Tracking number of DHL they do not want to send me I also request the number of the Director but it was useless. In my last communication with them they request payment of USD 451 as I did not now they stopped writing to me, and my products never delivered.
Show more...

Cancer patients all over the world are being scammed

Alibaba Distribution is selling a product called Blushwood Berry extract and other raw materials.
I discovered this cure for cancer last year through research on the internet.
I am very educated on this matter and started a group on Facebook.
One of the members posted a company out of China that actually sold this but I knew it couldn't be possible.
Due to availability and origin it isn't possible
So I contacted Alibaba Distribution multiple times telling them to please stop scamming sick and desperate people.
They finally admitted they don't have the raw materials to manufacture this product but they still continue to sell it.
Cairns post in Australia has came out with the truth after I notified the owners of this patent EBC-46 explaining to them what I discovered
I would like to request this to go viral.(mainstream media) please.
This company needs to be stopped. It is sickening.

I’ve been scammed by someone in Turkey

I thought that I was buying from someone that had an actual store on Alibaba.com. It was a front for a fake store that they took money for a product that I ordered for $450. Said it got shipped gave me a fake shipper that they made. Said it got stuck in customs and needed another $270. The fake shipper is http://optimallogs.com. They did a great job with everything. I called them on it though and didn’t give them the extra money. All of a sudden after I called them on it they ended all communication with me. They have certificates for a business, pictures of the product you want and everything. It literally looks legitimate. They ask for you to do a wire transfer to this address 248 Havalimani Karsis, Istanbul, Turkey.
Show more...

I was scammed by Oliver Jack

I got in touch with him through Alibaba website to for a petamin syrup that he claims he was selling. He promised that he had it so I order 2 cartoons and he said he will shipped it the next day and that it will take 3 days to receive it. 2 days later he calls and said that they accidentally mailed me 10 cartoons instead of 2 and that he needed 400 in order to send the package. He had me to send the money through Western Union instead of paying through the site. Which this was my first and last time buying on the website. Now I know my dos and don't.
Show more...

I have been scammed by KVK GSM STORES

I was ordering for a product a product online (alibaba.com) and came across his product.
Show more... 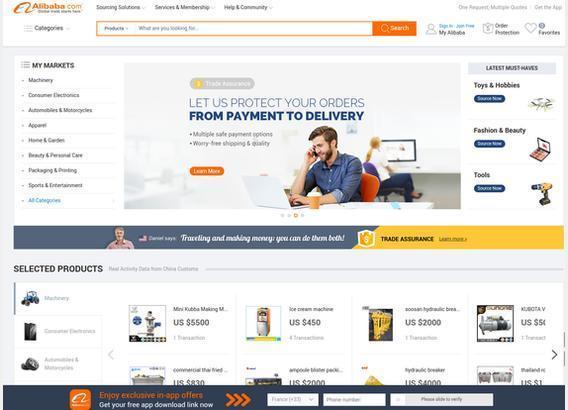