They initially ask for 250 and will never receive payment
Show more...

I answered a call from +16465580083 his name was John Fuller. He talked me into depositing $200 to join Bannerbit stupid me did it so i guess i will never see that money again.😭
Show more...

I signed on with banner bit, inearly January giving them $250.00, which I thought was supposed to be my investment money only to find that,that was not the case. Which was not what their advertisement said. The person handling my account (Dylan Carter) told me some of the offers that they were running at the time, starting at $1000 and up,, up into the $10.000 range. I told him I didn't have that kind of money, I would have to see what I could do. I didn't feel comfortable with this ,so I started the process of getting my money refunded . Wow! I have been trying to get my money refunded since January, it is now March. I have made several phone calls, live chats, emails requesting my refund, making complaints trying to get my money back,, only to get jerked around and I am still waiting . Dylan Carter wouldn't return calls , wouldn't respond to emails. I would do live chats on their site making complaints, making requests, only to get a bunch of empty B's. Then I got fed up and continuously called , emailed ,live chats not stop and said enough. If I didn't get a response that day I was taking further action. Didn't take long, and Dylan called me,,FINALLY,
I I TOLD HIM THAT ENOUGH WAS ENOUGH I WANTED MY REFUND THIS WAS RIDICULOUS AND WE HAD OUR WORDS AND HE REQUESTED SOME INFORMATION FROM ME IN ORDER TO PUT THE REFUND THROUGH SO I IMMEDIATELY SENT HIM THE INFORMATION HE WANTED ONLINE SO IT WAS WITHIN A MATTER OF 10 MINUTES AND I'M STILL WAITING THAT WAS LAST WEEK THIS IS RIDICULOUS I'VE NEVER EVER IN MY LIFE HAVE I EVER EVER DO ANY BUSINESS LIKE THIS I HAVE TRIED TO RESPOND TO THEM SINCE THEN AND I AND THEY WON'T EVEN DO THEY WON'T EVEN ACCEPT MY LIFE CHAT NOW IMAGINE THAT
Show more...

Its a scam i know

I invested with. Bannerbit 250 got on my dashboard and saw what my money was inveted in Dylan Carter convinced me this was a good invesment. I put another 1000. I started in jan end 0f feb put the second one in i bidded on a 90 day banner worth 120 i toke my profit to pay for it all seems good i won bid my account went up over 120 and decited to pay myself 100 from profits am writing this after. Speaking with costumer service. Who can not help me untill dylan approves it promises to call me back.i said get it to my bank before it closes today. March 6 2018. Am waiting. I told Dylan yesterday what i wanted and now can not get him.
Show more...

I invested $200.00 to banner bit. I bought several banner ads and had been up to over $2500.00 profit. Suddenly, without warning or reason my account was closed. I want my initial investment back as well as my profits. I earned them.
Show more... 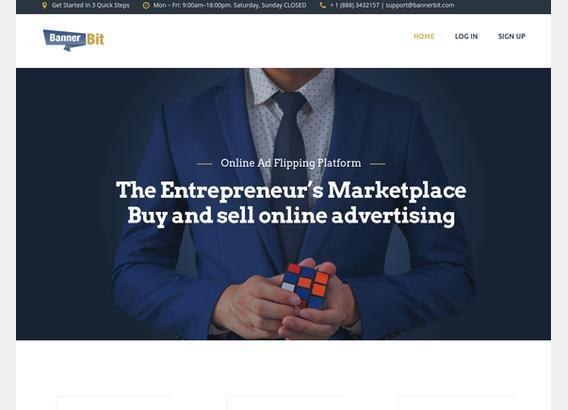