The seller is in china using a very legitimate looking website and there is no option to cancel orders. The beats appear to be on sale
Show more...

I purchased my husband Two pair of beat wireless headphones from the website on June 17th. I paid for expedited shipping. I received no confirmation email not even an order number..They have a login page but no where for you to create an account. The phone number listed is always busy even during business hours & I have sent countless number of emails.
Show more...

This is totally a SCAM, please BEWARE!

While I was cleaning the house, my son shows me the website https://buypowerbeats.com where the beats headphone sale for $69.99. Carelessly, did not do any research and for it low prices, I ordered 2 beats headphones and paid $140.
Couple days later I received an EMS tracking number through my email. I then track it on EMS website-is a China company i think, and nothing shows up. I tried tracking it couples time more within next couple days, and nothing shows up. The given tracking number is a FAKE one. Reported scam to the bank, and was told that many others had also reported. Wow! Lesson learned.
Show more...

Same thing happened to me. When questioned, their response was ".....sent a couple days ago". No links, nothing else. Original tracking number still didn't work.
Show more...

The site looked legit until I processed the payment thru PayPal. As soon as the payment sent I noticed it was paid to something written in Chinese or Asian lettering. Then instead of the company name being "Beats By Dr Dre" like it says on the banner at the top of the page, next to the payment on PayPal, it says the company name is "Bluetooth earphone shop". I write them an email asking if it's a fake site and they write me back like a day later telling me not to question their product. It's been about 5 days or so since I ordered and I still haven't received ANY tracking info for my item. DO NOT ORDER FROM THEM!!!!
Show more...

I have ordered a pair of earbuds that really wanted when I'm working. It's been a week that it has not arrived at all. DO NOT BUY ANY PRODUCT IN THIS WEBSITE BECAUSE I have received a email from them that it had few Chinese words
Show more... 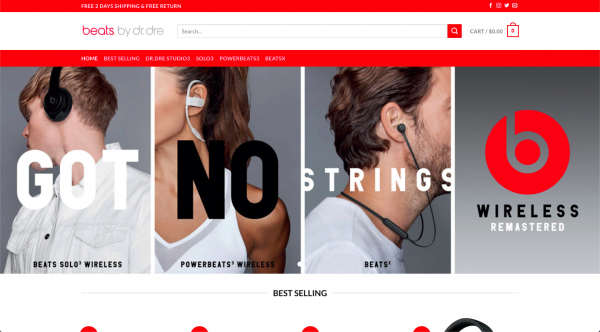