Purchased a miniature schnauzer (named Sugar) for discount of $500 and $200 for shipping by air. The tracking information on the site they provided for Prime Pet Ways, Ltd. showed an incorrect delivery address. When trying to contact, they stopped communicating, when calling back to supposed breeder, they hung up on me. I did a photo image search of the dog shown on the website and it shows up on both sites and we realized we had been scammed completely. The shipping web site shows a facebook site of Angelica Ventrice, Health Coaching (@angvfitlife83). Not sure if that was actual or a mistake, but it is part of what was found on the site. I will work to have the sites taken down by their service providers.
Show more...

Took my money and never received the puppy

We order a puppy for 600 and 100 shipping charge.. the freight company call to confirm the address and they sent an email for 1200 crate need to shipped the dog. Of course i was not paying and additional 1200.00 when i was told the charge including was 100.00 call back the company now they will not return my phone call or the money
Show more...

We purchased Mini Schnauzer named Sugar for a discount price of $600 and $150 for shipping the puppy by air. They never gave the correct tracking information and when we tried contacting them by phone and email and they never answered back.
Show more...

I been scammed by gallant mini & giant schnauzers

Yet another $700 scam by gallant mini and giant schnauzer. I wish that I had read the review before trying to purchase a schnauzer from these scammers, they ask that you send the money through zelle because if you try to dispute it you wouldn’t be able to do so and when you try to contact them (gallant or better yet Taron Adamson) they’ll act as if they don’t know what you’re talking about then hang up and not answer the phone when you try calling back. So for anyone else please look into the company and reviews. This is an expensive ($700) lesson I learned.
Show more... 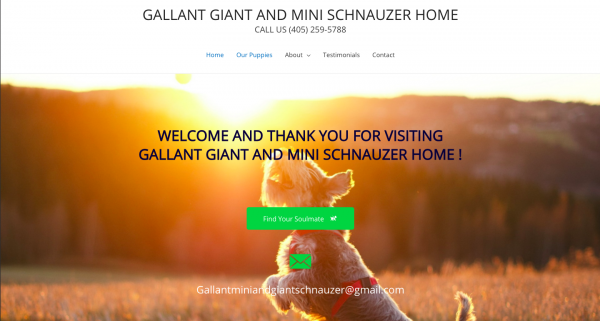