I have been scammed by Homethreads.com

Wayfair was out of the product I wanted, so I found something similar on Home Threads. I went to check out and it took my information but didn't ask for a shipping address. It left my bank account this morning. I've been calling and leaving voicemails and not getting any returned calls. Their voicemail sounds fake too. I've emailed a bunch and no response.
Show more...

I was told shipping would be free to my front door. I live in a building that requires a COI. When I requested from their third party delivery provider, they said it would cost $125. This is obviously bait and switch. I complained on Homethreads' Instagram and they BLOCKED me. I sent numerous emails to no response. I called during business hours and left a voicemail. Their voice message said they would respond within 90 minutes which they did not. This company uses deceptive and false advertising and blocks negative complaints from public view.
Show more...

I made an order and contacted customer service because weeks had past and I didn’t get my shipment. When I contacted customer service christoper a representative told me my furnitue is out of stock until 6 month later so o canceled the small Salinas animated I ordered and got refunded for it. I’ve been waiting for my big cabinet and on their confirmation it says delivered and sent but they sent me the small cabinet that I was told they didn’t even have until 6 months later... now they owe me money difference because I didn’t get the item they claim they sent me. So far the responses I got was “contact ups for shipping issues” how stupid is that
Show more... 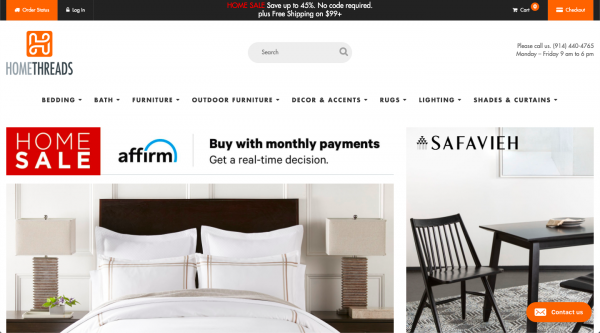