Through an advertisement of Akita puppies for sale at a website called luckyakitas.com I began to correspond via email and text to a person named Donald. The person answered all the questions I had to set me on my way to buy a puppy for $700 and have it shipped free of charge by means of a voucher that the company (Lucky Akitas) provided. The payment was made through Zelle. Expecting to receive the information to pick up the dog at the airport, they did not reply to me nor send the pickup information. Though they previously responded promptly before the payment was made, they have not responded thus far. Lucky Akitas is a scammer. They even sent a contract with an address in Texas that makes it seem like they are legit, but they are no longer communicating with me and there is a similar scam reported in connection with the same phone number (832)650-4929 associated with a website called bulldogparadise.org.
Show more...

Wife found the lucky akitas website and made contact. Person answered all the questions and seemed knowledgeable. After money was paid the person did not respond anymore to any contact requests.
Show more... 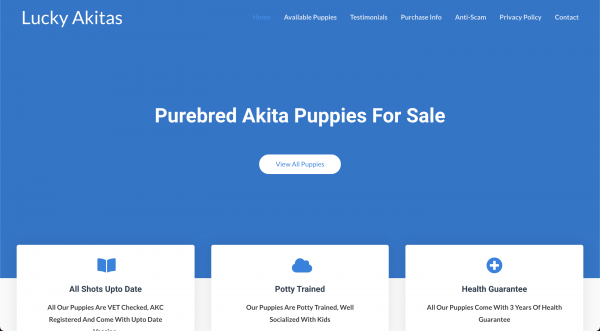