Ordered online. Scammed by ad on Instagram....DO NOT ORDER ANYTHING THROUGH INSTAGRAM NOR MEGADEALS. Product/heater never received. No tracking, no response. Why does Instagram sponsor?
Show more...

ordered product beginning of Oct. 2018 a month went by did not receive sent an email. Nov.15th was told I would receive within 21 days. before Xmas sent another email was told it was in transit would receive any day now. another week went by nothing. Sent yet another e-mail. then was told it was returned for some reason.. Was asked if I wanted to reorder or refund. Told them I wanted a credit to my account.. it would take up to 14 days well it has been three weeks and no credit. Been sending e-mails and now no response...
Show more...

I ordered a hearing aid from this company as a gift. I should have realized the price was too good to be true. First, it took nearly 6 weeks to arrive. The device doesn't work. I've emailed them three times and opened a "chat" with them twice. No one has ever responded. DON'T DO ANY BUSINESS WITH THIS COMPANY.
Show more...

A last minute Christmas gift was ordered from Mega Deals Ltd.
I ordered a Drone On Dec 16 2018. They said 20 days delivery. I did not get the Drone. It is now January 18 and not Drone. Fake tracking numbers go nowhere. I complained to PayPal with their supposed protection program. They started a case. They told me the company would respond. I received one email with another fake tracking number. I asked PayPal to refund my money. They said they contacted the company and it would be resolved on Feb the 14 of this year, 2 months later. PayPal is complicit in this matter as they are not refunding my money. Now I am afraid that I will receive a substandard product or none at all. How can I expect to get service if the drone is no good. I just want a refund but so far PayPal seems to not care. I do thousands of dollars of business with PayPal. They too seem to be complicit with these scam companies. Do not under any conditions do business with Mega Deals. You will be very sorry. I am thinking that I will start using Google Pay from now on. It seems that PayPal is penny wise and pound foolish. STAY AWAY FROM MEGA DEALS AS IT SEEMS TO ME TO BE MEGA SCAM COMPANY. The company always answers with sweet emails but it is just IMHO a stalling tactic until you just give up.
Show more...

Purchased a defective Mini Drone (Baby Elfie)
It arrived (after one month) and It didn't work.
I notified Megadeals, ltd and was ignored for two weeks.
I didn't stop contacting their support(? ... not) team.
Finally they gave me an address for a return to (China), told me to send them the invoice, then they would reimburse me.
I did as instructed and sent them the mailing invoice for $71.00.
They said they don't reimburse shipping and that if I "didn't want it I should have rejected the package."
This made no sense, since you don't know if it's defective until you open it!
They refused to reimburse the shipping.
Lesson Learned: BUY FROM AMAZON!!!!!! Megadeals is a rip-off!
Show more...

Megadeals, ltd does not follow its own company statement!

"Our company statement says it all: Customer first. We don’t let things happen, we prevent them from happening. With a cutting-edge customer support system and high-quality products, we don’t only prevent you from having issues, we also make sure that they get solved really quickly." Purchased an item. It arrived defective after 30 days from China. Tried to return it. Waited 2 weeks. Followed their instructions exactly. Then they refused shipping for an Item broken item. My impression: 1. Customers last. 2. Sell junk. 3. When made aware, they abandon the customer. Recommendation: Buy American!!!
Show more... 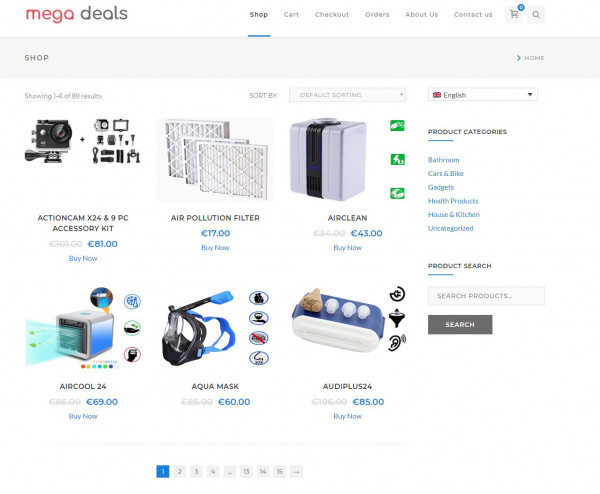