I was using an app called "Offer up" when I saw an add about a blue Toyota Tacoma. The seller said to message them with an email address so I gave them mine. We chatted back and forth about the truck, I asked to see more pictures and they sent the pictures. She then messaged me saying we will be using eBay vehicle purchase protection program to secure our deal, and I thought, hey why not, if I don't get a truck within 5 days i'll get my money back right? Wrong, the eBay invoice I received turned out to be a fake one and I lost $4,000 total.
Show more...

People should never send their own money as a refund of a Banker's check due to a supposed bank error and have to mail the pretent buyer's monthly salary to the buyer. The buyer will want his money back before you even deposit his bogus check because it won't clear then you have to pay fees to pay and out of pocket and you will end up loosing money.
Show more...

The individual in question is selling a 2006 Dodge Charger for $2000 on OfferUp.Says she has to get rid of it ASAP as she is in the air force and being transferred to the AFB in Anchorage. Once you give them your info, you are told where to send the money, which is through an ebay agent. Ebay doesn't have agents that you send money to. Also, she seemed like she wanted us to send it right away and even had Ebay's logos all over the email to make it seem legit. I am not sure how many times they have used this on others and made off with their money, but it is clearly a scam.
Show more...

To good to be true, pickup

I was browsing offer up and come across a Toyota pickup for 2,000 dollars. When I contacted the owner she gave me a story about her husband dying and the truck just brought her and her daughter bad memories. Then she said the truck is in Mississippi and I have to buy one vanilla prepaid cards to send the payment to eBay, well I didn't find the truck on eBay. Then I started googling everything, and apparently, the story that a son or husband has died is a frequent one. I just wanted to put the story out there so no one falls for it, I didn't!! The truck is a 2002 Toyota pickup, red,4 doors in beautiful condition and she has lots of pictures of it, who knows where she got them. When I looked up her address the house is not the same one as in the photos. Please don't anyone fall for this you have been warned.
Show more...

Someone is attempting to scam through OfferUp

I had posted an autographed Magic Johnson Basketball on OfferUp and I got a message about 20 min later saying someone was interested in buying the item for the listing price ($250) but they would add another $40 for holding onto the item. They told me they would send a check in the mail for $1850, and they did, the check is a fake but looks legit and real. So now they want me to take the check to the bank, cash it, deposit it into a Wellsfargo account and then have the "Movers" come pick up the ball...... I told them I could not do it because I have work and then they said I can deduct another $20 for gas..... Seriously? Good one. I did not fall for this scam, but it is going around.
Show more...

I posted selling item in offerup. I was offered to received a check by mail.with $50 extra and the check beeb hight for me to suposly cash it and send left money back, that same incident happened earlier with craiglist. Reason why i knew was scam
Show more... 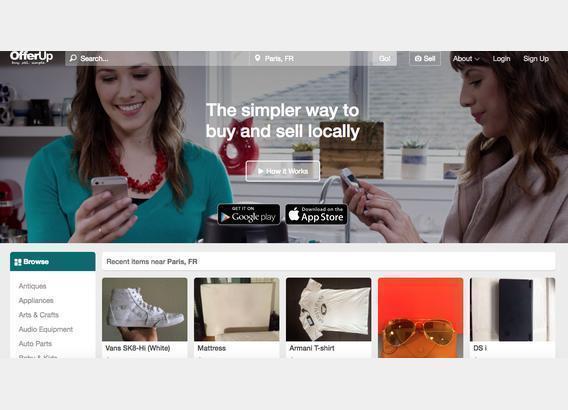