Contacted rent2ownclub.org,was told needed to work with credit repair specialist,they put me on the phone with Lexington Law,who opened a case for me a charged $129.95,which is a monthly fee.I gave my case # to rent2ownclub as I was told to do.I received 17 different houses to look at in Wichita,Ks.by email.I was told to let them know which houses I wanted to look at.I did this and was told I would be contacted by a real estate agent in Wichita,Ks.to show me these houses.When the time went by that rent2ownclub said I would be contacted by an agent,I received no calls or emails as I was told I would.I tried contacting rent2ownclub by email and telephone,and can't reach them.My emails are ignored and when I call,the phone rings once and then goes to a busy signal.When I use another phone to call,I can get through,although I only tried that to see if the phone would answer while trying a different phone number other than the one they have on file for me,I did not try to get past the opening recorded message.It seems od that using a different phone,they answer but using my phone they don't.I feel strongly that Lexington Law uses these tactics to get business.I did contact Lexington Law,and was told they could help repair my credit,but they did not want to talk about the Rent2ownclub connection.To Date,the only party getting my money has been Lexington Law,which leads me to believe that Lexington Law and the Rent2ownclub are the same people.I cancelled my case with Lexington Law on 10/30/2109.
Show more...

Received a email in regaurding rent to own home with bad credit with the help of lexington law had no contact with realitor coudlnt even find said realitor. We have gotten the houses to look at but no further contact. We have no idea where these houses are and wont know until we are scheduled to see them. we were told that we would be in a home within 7 days. Now being told that the realitor wont be in touch for 2 days. I have contacted lexington law and am still unsure about what im to do now .
Show more...

Contacted this company found their add on a rent to own website. They sent me an application they said I was approved then they said they would send me a list of houses to choose from they sent me a list of 20 houses in the Houston Texas area without the address is cuz they said a realtor would take me to look at the houses they also connected me with a Lexington Law repair company said I had to start repairing my credit in order to qualify for the house after my first payment came off of my car to Lexington Law that's when the realtor would get in touch with me and take me to see the houses but after everything was done the payment came off my card I sent them the screenshot of it the realtor never called me I've been emailing and emailing them because I don't have a phone number for them and the Caroline Cabrera lady who I was corresponding with through the emails stop talking to me they said they didn't know why the realtor didn't get in touch with me and they would try to find me another as soon as possible and that was over a week ago I have to move didn't get my house I have end up having to move in with a family member because I thought I was about to get a house and I really feel like the Lexington Law people are running a scam get you to sign up for credit repair by telling you you're going to get house this rent to own club place it's a scam you do not get a house
Show more...

They asked me to sign up with a Law Firm to qualify using their credit repair service 888-493-5690 x60517 they wanted me to pay $129.95 a month this law firm. I called Paul to tell him there was nothing negative on my credit and that I did not sign up for anything then he hung up the phone on me and would not answer any of my calls. He is a SCAMMER. I will be posting this on every social media I can access. They better not use my social security number for anything. I will sue.
Show more...

This Rent to Own Club/Lexington Law firm company/program is a complete scam. My personal experience with these companies was never good. The customer service experience is really horrible and advise you all to save your money and time all they want is your money. My personal experience was when I contacted the Rent to Own Club to inquire some more information about what the requirements were to qualify for the program. I spoke with a gentleman named Jack who also gave me an extension phone # to reach him ( just a typical common first name only no last name). After he told me I met the requirements he said he would transfer me over to a Law firm who would work begin to work on my credit and for me to give him a call back with a confirmation #. I was transferred over and spoke with a lady named Amanda who then explained to me what the Law firm company does as to building your credit score. Amanda told me I would need to pay $4.95 to run the credit report and then pay $129.99/month to the Law firm so they can continue working on cases associated with your credit. I was given like 2 days to pay the first $129.99 and was charged a $19.99 late fee on the same day my first payment was due. When I asked about why I was charged a late fee on my first payment and explained it was the same day the payment was due they said they would give me a refund of $19.99 which they never did. I was also told that I would be given a list of houses and to choose the few that would like to go and see and inspect to make a decision on which house I would be renting and potentially owning in the future. Amanda told me she would call me back the following day at a certain time. The following day I never received a call from Amanda at the scheduled time she designated to call me back. I then called the original number twice when I spoke to Jack to follow up on my status and to no surprise I got no answer, it pretty much sounded like the phone rang one time and then was hung up on after one ring as if they know my phone number. A couple days later I received an email with a list of houses to pick from but no addresses or even an area of location. I responded back with 3 houses chosen to view, and was told that I would be assigned a realtor named Mr. Parrish Martin (sounds made up but whatever). I was told Mr. Martin was supposed to call me within 1-2 days, so I assumed I would receive from him later on that week. Again as I wasn’t surprised with my experience so far I received NO call that whole week and I decided to follow up with an email. Once I explained my frustrations in follow up email about I was given some unprofessional responses about how the company did not know what happened to Mr. Martin and to stand by and wait for further instructions because Mr. Martin does not work for their company and is a private real estate agent who they aren't responsible for. When the decision came to cancel my account I called the Lexington Law firm and originally spoke to a lady named Bobbi who when I first stated I was calling to close my account she immediately hung up on me. I called back immediately and no one picked up and was forced to use the chat option located on their website. I believe the law firm was working on cases associated with my credit report because I can statuses changing and they were constantly communicating with me, by email for the most part. The other side of it which is the Rent to Own Club I believe was the scamming side. Both companies are connected in some way when working with the program but operate entirely private/separate from one another and seems like little to no communication is involved. I work in professional customer service and told them when I schedule an appointment whether in-person/phone I commit to every single appointment in the most utmost and respective manner as possible especially when dealing with sensitive and personal information. The Rent to Own Club does not have any contact information, mostly communication is done by email and I would think twice about doing business, providing personal information, or paying money to someone who you can never see in person, or talk to over the phone. There may be some legit Rent to Own programs out there, but this one is not it.
Show more...

This is a real scam!!

I looked in the internet for houses in order to move out with my I'll father. Searching for it I found out about the rent to own club and called them. Everything looked simple and easy. They transferred me to Lexington law for credit repair even if I told them that my credit was good I only had no down payment at the moment, yet I had to enrroll in the credit repair company as a requirement to move. After couple of forms filled and email I received the name of the realtor named martin parrish. I looked him up and he is a realtor from Florida but I bet he has no knowledge of these people using him to scam others. Someone has to stop these people ASAP!
Show more... 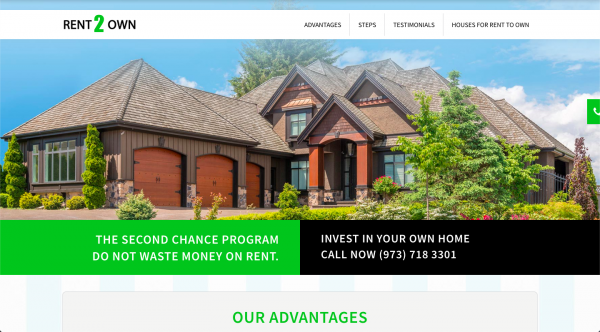