Resort Daddy took my money knowing that the dates I requested for my vacation wasnt available. They agreed to send me a refund and sent a comfirmation e-mail stating that I would received my re fund in 14 days. 18 days later they sent me another confirmation email that it would be 14-21 days. Its day 23 and I still havent recieve my refund.
Show more...

The company offers reduced lodging in exchange for time share sales pitch. The website states the selected dates for lodging are available but payment is required to receive the lodging confirmation. Once payment is made, the company sends an email stating the requested dates are not available and alternative dates must be selected. Customer service representatives over the phone state refunds will be processed in 14-21 days and an email confirmation for refund request is sent. After 21 days the exact same email is sent again stating the refund request has been received and will be issued in another 14-21 days. This is a recurring email every 21 days where a refund is never issued. After several phone calls with interactions from different customer service representatives, I have stated I would report the charge to my credit card company and open a fraud case againt Resortdaddy.com. In response, on two separate occassions four days apart, the customer service representative stated they were processing an "emergency request" to have the refund issued by the end of the day or the next business day at the latest, and they instructed me I should not contact my credit card company. It has now been 42 days (7 weeks) since my initial refund request, I have opened a dispute with my credit card company, and I still haven't received a refund.
Show more...

I purchased an Orlando resort package to which they could not fulfill. They claimed they "upgraded" me to a Gold Package of which was not discussed and most of the package I was sold on was eliminated. I asked to be refunded and they said that I was out of my 30 day refund period. I explained to them that If they were unable to keep up with their end of the agreement that was made and sold to me, that it didn't matter about my refunded deadline request period, I should be refunded my monies. I paid for a service/product and it was not supplied. I am entitled to a refund. I have spent weeks trying to speak to someone further than Customer Service, and they refuse to give me anyone's email, phone or even name. I made a complaint with the BBB and Resort Daddy said they would issue me a check but their system was down , so to please allow 10 days for a refund. It has been 90 days. BBB is still sending them inquiries, they have not heard anything.
My next step is to contact the Attorney General Office in California (Resort Daddy's last known address/state) 1-916-210-6276 in hopes to get a class action lawsuit going, the Department of Justice; Seller of Travels in LA, California 1-213-897-8065, the County of San Diego Alternative Dispute Resolution Mediation 1-760-201-8204 or 1-619-450-7478, the American Society of Travel Agents; Consumer Affairs Department in Alexandria, Virginia 1-800-275-2782, Fraud Hotline in Florida (as I heard they may be in Florida now) 1-866-966-7726 and Consumer Affairs in Orange County 1-407-836-2490 I received all of these phone numbers after the BBB told me to contact the Department of Consumer Affairs 1-800-952-5210. The woman at the Department of Consumer Affairs gave me all of these numbers. I am in Michigan - the Michigan number is 1-877-765-8388 for Consumer Affairs. They told me to contact all of the other numbers, but made a complaint and have it stored.
Show more...

Paid for a vacation that was never fullfilled.

I paid for an Orlando vacation February 2019. I have tried to contact Resort Daddy to schedule my dates and the customer service number is no longer service and I cannot reach anyone, even via their website to discuss my vacation. Terrible scam. Please do not waste your money.
Show more...

I bought the 4 day/ three nights for my family. Tried to book, not access to link and called numbers listed. No longer available!! just received a package code, but nada!!
Show more... 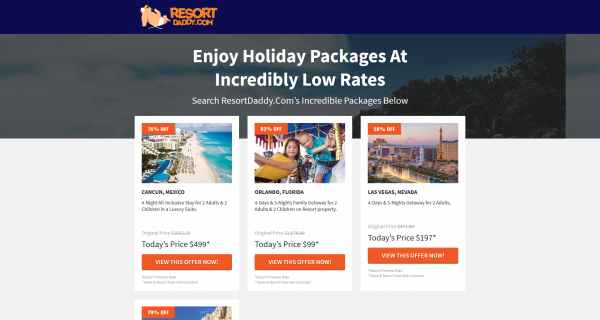