I recently paid $1 to observe my credit report ( which really told me nothing at all) and when I tried to cancel before my subscription was up none of the numbers provided online were in service so I called my bank and gave them the numbers also that were disconnected. Now today after basically a whole weekend the numbers provided are in service and the representative is telling me that the numbers were not disconnected and I can't receive my refund because it has passed already. I am definitely disputing this with my bank.
Show more...

They pretend to report your score for $1.00 fee if you don't cancel quickly they stat charging big fees
Show more...

I accepted an offer for a $1 trial with a higher price that would continue the service if I had not cancelled. I found a phone number and called to cancel. The gentleman who answered the phone could not grasp what I was calling for. then he could not find my account.
After being put on hold 7 times I asked for a supervisor. Two more times on hold and then his supervisor took the phone. She took all my information again and put me on hold. When she returned, she said she had everything thing she needed but she starting talking about the weather and her friend named Jeannie, I sat through 3 more holds but thenshe wanted me to tell her why I wanted to cancel. I finally told her just to do it, 2 more holds. During the holds she had many wonderful things to tell me that I would miss out on if I canceld.Finally I got what I had called for. I lost $1 but I could see where this. would discourage. someone without much experience from hanging on the lne.
Show more...

I do not remember making this purchase.
Show more...
Unresolved

Had to get a credit report from all three, it was only going to be $ 1. . Never said anything about a subscription, never mentioned I was going to be charged $ 39.90 in 1 1/2 days So to make a long story short these assholes charged me twice for a report I never got , they need to be put out of business Scrhug.com. BIG SCAMMERS
Show more...

I NEVER PUT MY INFORMATION IN HERE

It taking out of my bank account and i don't want it to
Show more... 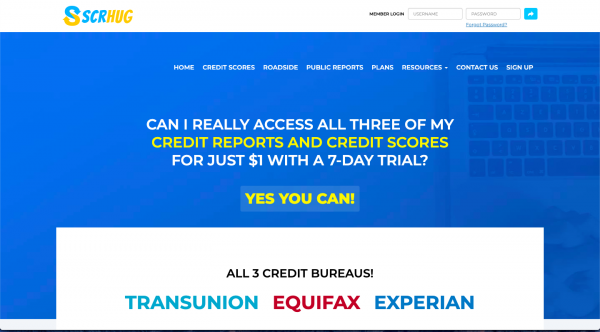