I was scammed by seekhd

I used it to track my phone when it got stolen from work months ago and it was never found but seekhd is still charging my card 26 dollars they just took it out my account and that was months ago I need my money back
Show more...

I never even used the app. Not even the 50 cent page they attempt to lure you in with and was charged 26.95 for ABSOLUTELY NOTHING!! I NEVER subscribed or joined or agreed to any further or future payments. I was prompted to cancel my subscription I NEVER Subscribed too and the upon cancelling I was informed my subscription is good until January 18th and I will no longer be billed...
What In The Heck..?? What do you mean No Longer...??? Why was I Billed Initially....This Is Crap and Surely Cannot Be Legal or Binding!! I NEVER Agreed to ANYTHING ...
LET ALONE SUBSCRIBED TO AN APPLICATION I WILL NEVER USE NOR HAVE I EVER USED!!
Show more...

Paid $.50 to check something out on a profile

Paid $.50 to check something out on a profile and they charged me the next month when all it was supposed to be was $.50
Show more...

I have been scammed by by SEEKHD.CO

I contacted SEEKHD.CO because wanted to know where my teenager son was at that late night September 26/20 using his cell number. I was supposed to pay $ 0.96 for the first phone tracking. Their webpage said : you can cancel anytime.
They found that my son's cell phone was a landline in a city 1 ¹/2 hour from my home. I realized this was a scam.
I tried to cancel this service with no success. I've been charged 3 times $26.95 . Now, I've contacted my credit card costumer service , and I have to wait 30 to 60 days to fix this issue.
Show more...

I have been scammed by seeks.co

My boyfriend was missing and needed to find his phone without location turned on or the phone itself. And of course as everyone else said .50 cents and than they took 80. After that
Show more...

Illegal charges on my debit card

they charge $.50 to do a search on a phone number that you don't recognize. I guess I did this on dec. 1st. or someone in my family. it was a good price. They fail to tell you that they register you and you dont know how to get in the app. so ya figure that's the end of it. then on december 18th a charge of $26.95 shows up on my account. then on the 21st. $16.88. for nothing! now they wont refund the money.
Show more... 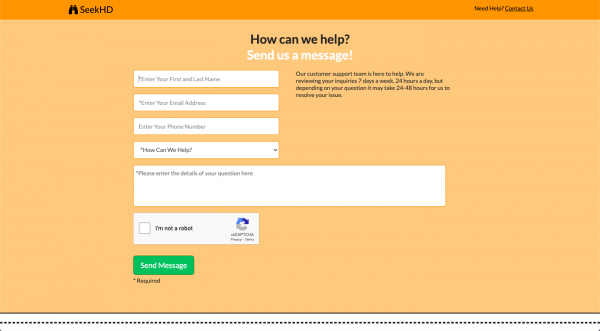