I have been scammed by Social Envy

This company claimed they provided services to help with social media engagement - if I made a one time purchase of $33 through my PayPal they would help me- as I’m in actor it’s important to have large social media following so I decided to give it a try.

A couple months later I got a notice from my bank account I had overdraftrf which I found odd because I’m good with my funds. When I looked - I saw I had been charged over $330 dollars by Social Envy. I immediately contacted them via e-mail so I had written proof that I wanted the unauthorized transactions canceled. They said they would cancel them and look into refunding the money. It has been almost a month and no refund has been issued, they stopped responding to e-mails and also they continued to charge me until I had to delete my paypal completely because they wouldn’t stop. Also they provide no service during the time of the unauthorized charges! And if you call the telephone number for the company no one ever answers. Go ahead and try it. It will always go until it beeps.

The whole company is a scam and their is no service provided. You can’t even leave reviews for the company but if you search many people have reported on other websites how it’s a scam and had the same issues.
Show more...

1 week of social media service turned into a month of unwanted recurring charges that i was unaware of .

I signed up for one week of service to help build my small jewelry business... One week turned into a month of unwanted recurring charges that I was unaware of. Once I figured out I was continually being charged, I reached out to them about my dissatisfaction with the service. Very robotic response, unapologetic AND they can't seem cancel my account because they cant locate it! After countless emails back and forth, I'm still trying to cancel. Now I have to go through my bank to report them.

Little over a month of unknowingly "subscribing to" this service, I've only gained 100 more followers. Not worth $160 and especially not worth the time I've put into trying to cancel.
Show more...

These guys just took my money and didn't do anything

These guys just took 33$ from my PayPal account and didn't do anything. When I asked them, they just ignored my e-mails. Don't work with that scammer's company.
Show more...

I paid them 20 US$ for a service that I never received. Nothing. When tried to email them (6 times!) nobody ever replied. I tried calling the numbers (BOTH the US and UK numbers)..they dont even EXIST!
This is 100% scam!!!!!
Show more...

Like other people have reported, after you pay them, they stop service. In my case the $33 one week trail was effective. Then I signed up for a 10 week period and after week 1 they stopped doing the work I paid for. They got $20 bucks out of me, but because it's on my CC I will recoup the $20. Makes no sense. Their service is effective until they stop the work.
Show more...

Spent $150 on Social Envy and received nothing

It's a pure scam they take the money and do nothing. I sent them an email asking what happens next they then said they needed my username and password which I was not willing to give them and that was it heard nothing after that. Stay away from there, I am reporting them to PayPal also and claiming my money back.
Show more... 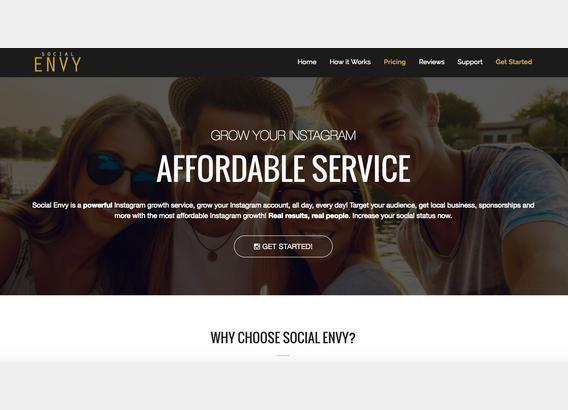