Hi My Name is E.,
Tradeflow24.com and Mindy Catherine on Instagram! (Forex Trader 🤯😂) I believe may be a scam. She and her company Tradeflow24.com contacted me on Instagram. Seemed like a nice person and said she would help me make $ with bitcoin. Me the trusting idiot I am said what the heck it’s only a little money so I said I’ve gambled away more. So sent funds and they opened an trading acct. which is on the Website www.tradeflow24.com and seemed legit. So after about 6 weeks my money like 10x
Then when your supposed to be able to get your profit all of a sudden a fee for this then another fee for that. Then every time I tried to get the money put into one of my bitcoin accts. Guess what a new transaction fee. Something always goes wrong and another fee. I’m sure you get it by now.
The fees end up being more then the initial investment and Every time it’s like a playbook promised no more fees whatsoever and moneys ready to be transferred! They wanted me to send another $1,000 so I said that’s it. I will be launching a campaign to expose this whatever you want to call it. You can make up your own mind! Be very careful. This last round I asked Mindy to FaceTime me or to give me some assurance that this was actually who I was dealing with! Guess what wouldn’t do it. I believe this isn’t who she says she is but I could be wrong! Only have her word it’s her and nothing else other then a pic of a Doctored drivers license from New Jersey that took days to send me and she says she lives in California also the one phone number says it’s in New York and the other one on what’s app is actually phone number on website for there customer service!
I was stupid don’t you Be!!!!
Here are the 2 numbers
+1 (213) 465-3772
+1 (917) 708-5928
Also Instagram acct. with name Mindy Catherine

Good luck and reach out to me if you have had any dealings with her or Tradeflow24.com and please share the Shit out of this!!!

Every Time I’m told it will be deposited into my acct. but after another transfer fee. Plus they stole some money out of my bitcoin blockchain acct. even after I changed Password and Pin.

The Crazy thing right now when you search there name nothing really comes up that it’s a scam but I’m hoping to change that and warn Honest people from getting screwed over by POS like this!

Disclaimer: These are opinions I have come to believe due to what has transpired over the course of months of dealing with this person and company trying to get my so called $20,000.00 profit 😂 ! Judge for yourself!!!
Show more... 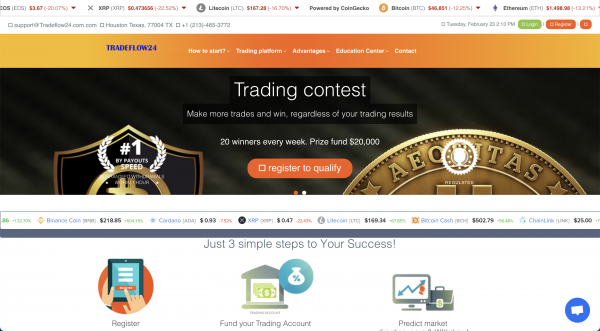