WILL NOT SUPPLY PHONE NUMBER OR ADDRESS FOR A RETURN

Need address to make a return will not respond with contact info they tell u 24 hours
Show more...

Zolucky.com is a scam clothing website I bought from recently.
I bought dresses and they said it was coming from China but the label on my package says it came from Delaware and the name is "Joe Doe", clearly fake. It took them 22 days for the package to arrive after I ordered too.
They charged me for $13.99 shipping saying it was coming from China. Now I'm trying to return the package and they are saying I have to pay for shipping back to China even though the product is clearly not what I ordered.
In total I spent $56 for a pair of cheap dresses that you wouldn't buy together for even $10 and they are offering less than $10 as a refund, saying I have to pay shipping all the way to China if I want a full refund.
Additionally, their review section on the website doesn't even work as you can't put in a product or order number in order to actually leave a review on an item, so it's impossible to leave a bad review and all the good reviews are likely fake. All the items have 5* reviews but they are all fake done by the company themselves most likely.
This place is a scam, don't buy here.
Show more...

I ordered a sweater as advertised and described ,paid $53.98 . I received a totally different cheaply made poorly printed fabric robe. I told the seller not happy they then offered a 15% refund, I didn't agree so they offered a 40% refund through PayPal.
PayPal sends me an email that if I send it back I would get a full refund. The cost to me would be $35.35 to send it back. About the same cost of the sweater and I would end up with zero product and out $18.63.
Show more...

Never received leggings that was ordered on 11/11/20

Placed 2 orders on 11/11/20. One order # was HBIIEOO106016, 1 a blouse on it, & the other order # was HBIIEOO106017, which had 4 items on it (it was a pair of earrings & socks, 1 blouse, & a pair of leggings. On the order that ends 016, they didn’t send me what I ordered, matter of fact, it was a thin cheap shirt. I ask for a return address & Christine, email, states return address is out of the country & offer me 20% back. That’s when I got suspicious of this company. I also asked for a blouse & leggings twice. I received the email for the blouse earlier in December but never received an email regarding the leggings. I did received the blouse but never received the leggings & they will not respond to my emails. I just want my money back for the leggings, plus the shipping. I read that they sometimes don’t send your items & it’s not a good idea to order from this business. This taught me a lesson. I will only order from businesses that’s legit. I will give this business a bad review wherever I can online
Show more...

I selected items from the Internet pictures but none of the materials were acceptable and the sizes were Way off, quality was extremely poor. When I requested to return I was told to send it to China when it actually shipped from the US. All charges to refund including customs fees where mine and it had to be refunded within 15 days of the received date 12/16/2020- but it took way longer to get the return authorization so they offered me 10%, then 15% and now up to 25% of my purchase price. Even if I return the items, how can I be sure I will ever receive a refund?
Show more...

DON'T BUY FROM ZOLUCKY
I bough a shirt for about $31 including shipping and was sent the WRONG ITEM. They explained to get a return I had to pay for return shipping to CHINA as well and pay customs FEES. I checked this out and it would cost at least $22 more to return the item. Instead they offered me a $2.85 refund then when I complained they offered a $6,33 refund.
It appears this company changes names and posts a bunch of fake 5-star reviews as soon as their negative reviews for the old company name become overwhelming.
See reviews for the related companies JustFashion and ChicV.
Show more... 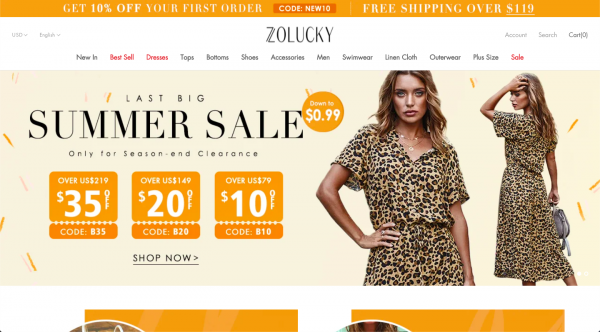