Entered a non roaming zip code to give me roaming service.

Signed up for Cell service with claim they were cheaper than Verizon in our area. Went to Destiny mall second floor booth Sprint Store and they started the sign up process that took 3 hours. $850 later we had the service but not before their systems would not take our zip code which is why it took so long. They forced the system to take a zip code that was fifty miles away from where we lived saying they did not understand why it just didn't like my zip code. Well through ten months of them also not knowing why I was always data roaming and could not use the 12GB a month I was paying for, I tried to sign up another phone that my son broke to be told that I needed to get another carrier because I lived in a roaming area and always have. That would explain why their system did not want to take my zip code.
I went back to Verizon who took my phones and promised a $600 visa gift card would be the best way to handle the situation and didn't even get that. I'm actually aiming towards cutting cell service companies all together but first need to deal with the left over $1500 bill from Sprint that they refuse to cut any break on even considering the charges for data I never got. They sent it to collections 30 days later despite my attempts at payments and calls to resolve consistently. They kept me on the phone for several hours each call to end in a supervisor promising to do something about it but not following through. One even transferred me to another department that said they needed to explain my bill to me. I had one call where the person literally mocked me with this statement "lady you should record yourself talking and play it back because it's pretty funny stuff". How professional is that?
Now after Verizon stuck me with this huge bill when it would have been better to do a buy back to Sprint first I am planning to do away with Cellular service companies entirely and go strictly prepaid. I would seriously urge anyone else to do the same before you have to deal with this credit killer situation too.
Show more...

In May of this year 2016 my phone locked. I went to the sprint store in San Antonio tx
The said my phone was not repairable, but that i was in luck because not only could they get me into a new phone but i would get a free phone. Witch i did not need or want.i knew i was going to pay for my new phone no doubt about that but this guys pushed the new free phone on me, saying well its free free its open you can put it up or use it its yours for free. Well its not i have been charged 75 dollars a month. What was free? Those people lye to meet their quota and that is robbery...i am very much upset.this is steeling and they should not do that.
Show more...

Sprint employees admitted to allowing a 3rd party open an account under my account, causing me to incur fees of 1200.00 and then refuse to reimburse me.
Show more...

Scam on half price IPhone from Sprint promo

It all started the day of Apr 15 2016 went in on the half price promos all a scam on the buy out credits being held when told they will drop in my account IPhone not paid as promise of fixing the first contract instead making two on one account so much fraud need to speak tired of writing about all the scams they pulling on there customers all you got to do is look to the web that I became another person subject to the scam to beat the people out there money half price on plans also a scam double bill you over price your plan you started with all to get back from the offers made by promos that was offered a trap to get over on the people fix that in credit they give they get it right back and more
Show more...

My husband order a new phone through sprint because of the new account special I was going to cancel my current sprint line but when I try to cancel my line they told me I can have that special and cancel that other phone because I just got it in mail and they have a 14 satisfaction guarantee and the sprint store on 5606 e. Kings canyon rd Fresno ca 93727 refuse to take my phone back without charging me a $35 restock fee while the sprint person on the phone told them they need to take the phone back without charging any fee and they also refuse to honor the special they are running upgrade to iPhone 7 plus special also.
Show more...

Doing business with a sprint is like going to hell as a large company they should be a shame of them self I have seven month problem with them and can not solve it. Every time they say they solve it instead they cut my phone, they don't returns phone calls went to a local place in Lynbrook gave them my phone never got compensated been a customer for 24 years. But there customer service just getting worse and horrible attitude Edna Edelman
Show more... 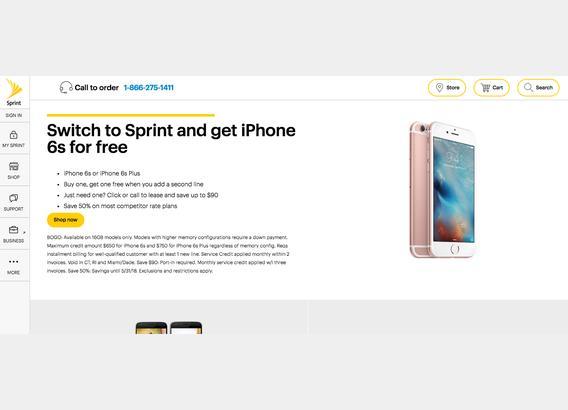