Been talking with them asked for no money just proof of address, bank statements photo I’d simple paperwork
Show more...

Got a call from a guy at a Ventura financial named Ethan Williams (the guy has a heavy Indian accent )that said I applied for a loan and I had been approved for a $30,000 loan for 5yrs 3.28% interest. Two days later they sweetened the deal and said it was actually for $40,000 that i had been approved for and they needed some paperwork which I sent like a dummy. The next day they called said I was approved for even more money $44,000 over 7 yrs 3.58% interest, but before I could get the loan I needed to pay $509.14 for insurance/ lawyer to Brightway Solutions LLC by money order and once paid I will receive the $44,000. It felt too good to be true, I did some research and found Brightway Solutions LLC was used as a place to send money for people being scammed by a company called Idirect Finance. So I used a number for Idirect I found online and asked for the guy at Ventura financial (Ethan Williams) that had been calling me and they got him to come to the phone I told him I knew they were scammers and to never call me again and signed up for LifeLock two minutes later.
Show more...

Ventura Financials is a scam

They kept me on the phone fore 20 minutes. First they asked me why I needed a loan and that they would approve me for 30,000 regardless of bad credit. He then said he would transfer me to someone and it seemed he literally walked down the hall and put his brother on the line. Please keep in mind these are Indian reps who asked for my address and didnt know which time zone I was in. The second person confirmed my address and phone number again and asked if I wanted 30,000 and If I didnt I wouldn't qualify? I stayed on the line for fun...they said within 30 minutes I'd receive an email requesting paperwork like a photocopy of my ID, a utility bill and 3 months paystubs. Do not trust this company. If you Google the address on their website it comes up as an apartment complex. Keeps getting better...
Show more...

It's bullshit scam these people promise u a loan

I have been scammed by Ventura Financials US LLC

I was looking for a loan for $5000. I was contacted by a company that said that I was approved for a $30000 loan for 7yrs. I was first asked for my personal information to prove that I was who I said I was. I then was asked to pay an underwriting fee of $510.11. I was sent paperwork that I signed and returned to them via email. Then a couple of days later I was told I was approved and just had to pay the closing cost of $1500.11 that was refundable and in 24hrs I would receive $31,500.11 directly deposited to my account. That was yesterday, that I sent the $1500.11. Today I called my loan officer, Logan Anderson, because I was going to ask him around what time the funds would hit the account. The number is completely different. A message of a woman speaking a foreign language answers and ends the call in english saying that the number is busy and to try back later. 1-855-850-7390. I think I'm in shock. Would you believe it, I still want to wait to see if that money is going to hit my account tomorrow. I will be contacting the FBI and my bank very soon. Also, the HR department for my job since I have direct deposit and need to close my account. Or contact some kind of protection...I'm in shock, also, I borrowed the $1500 from my brother and said I would pay him back in 24hrs, which is tomorrow.
Show more...

I have been scammed by Emilio Garcia

They send an email offering 30000 thousand dollars loan for not to good credit first they asked for the attorneys fees 501 dollars and after closing coast 2600 and that’s not all they wanted me to show an a good faith that I have 7 Payment’s available 2500 they send me a promise letter saying once they get it they Fund͏i͏ng my account when I call back to find out why is not in my account yet they wanted 5011 dollars for escrow then when I told them I don’t have any more money they block my number from Ventura financial and capital finance there’s associate and bright way solutions and they all coming from India because they get hand picked select to work in this place the comments from there own employees is on the link
Show more... 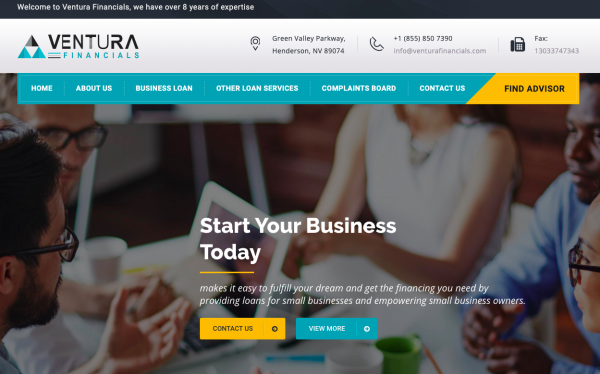